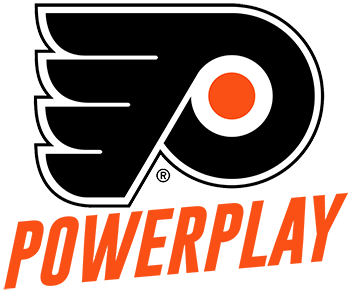 The Flyers PowerPlay currently play games twice a month on Saturdays September through June at Neumann University in Aston, PA and Norristown Recreation Center in Norristown, PA. The full schedule with directions to the venues can be found on our schedule page.

The Philadelphia Flyers PowerPlay was founded as the Philadelphia PowerPlay with the purpose of providing an athletic and social environment for people who use power wheelchairs in their daily lives. While sports such as Challenger’s Baseball, Wheelchair Basketball, and Sled Hockey have been established for some time, there was a need for a competitive sport that could be played in a power wheelchair.

This team was started by our founder and former team manager, Pat Hilferty, as a school activity in 1999. He and other students played once a week after school under guidance of their physical and occupational therapists. Upon the graduation of Pat and a few of the other students, Pat wanted to formally organize. The Philadelphia PowerPlay was born in September of 2003. The team plays twice a month and provides an outlet not only for members to play hockey but for the team to socialize in an atmosphere of acceptance. The family members have also been greatly affected in that they have others who share the everyday struggles and happiness that come with a disabled family member.

The PowerPlay participated in their first tournament in 2009 at the Carolina PowerHockey Invitational in Raleigh, North Carolina. The tournament consisted of the Michigan Mustangs, Minnesota Selects, and the hosting team, Carolina Fury.

After not competing in the 2010 Powerhockey Cup in Toronto, the following year, the PowerPlay hosted their first tournament, the 2011 U.S. Championship in Aston, PA. The PowerPlay finished in third place after defeating the Carolina Fury in the bronze medal game.

In 2013, the PowerPlay hosted their second tournament, the U.S. Championship in Aston, PA. They defeated the Michigan Mustangs 9-4 in the finals to capture their first United States Powerhockey championship. 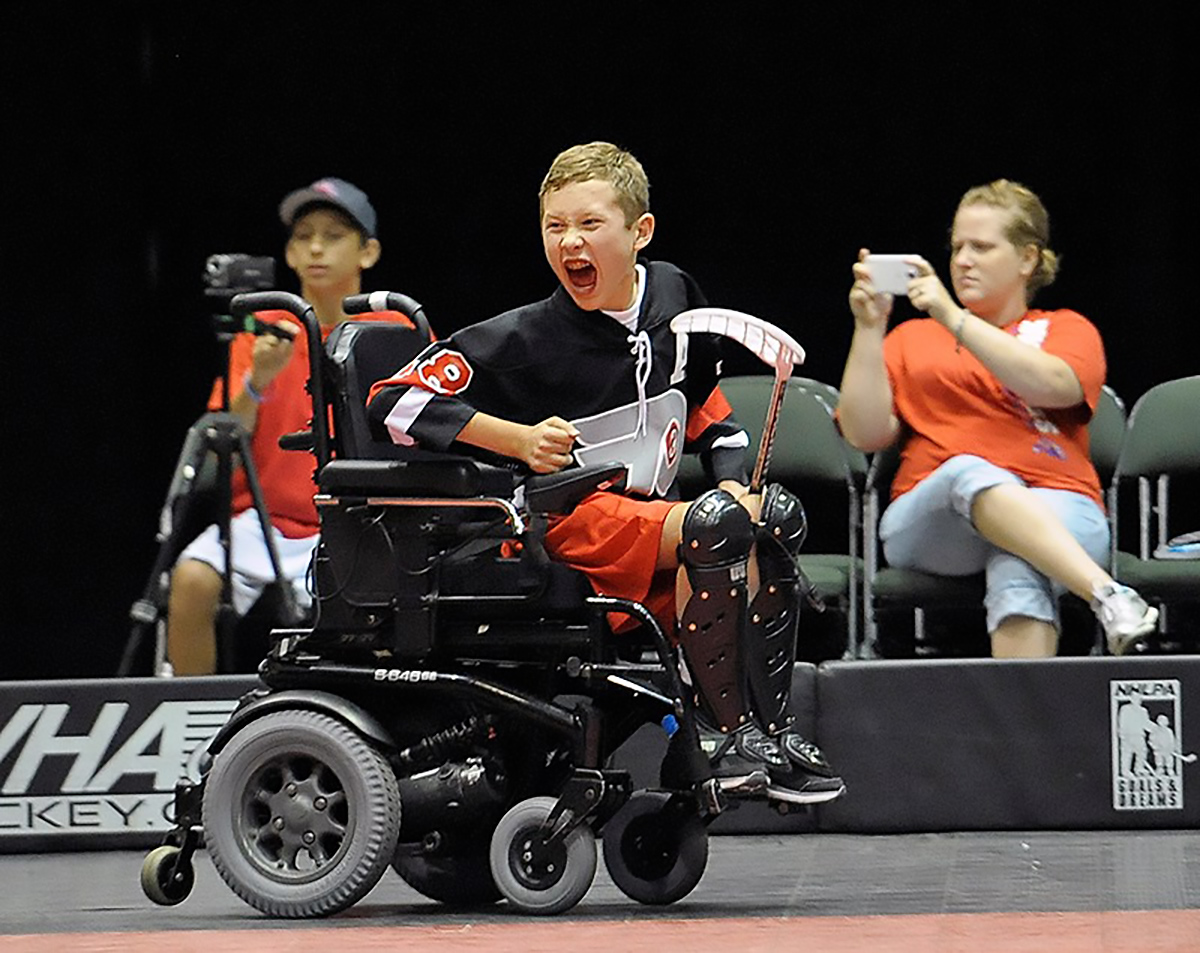 Jake Saxton reacts to scoring a goal in the 2014 Powerhockey Cup.

The PowerPlay arrived in St. Paul, Minnesota for the 2014 Powerhockey Cup. They advanced to the finals after a dramatic comeback against the Calgary Selects in which forward Jake Saxton scored the game-winning goal in overtime. The undefeated PowerPlay faced off against another undefeated team, the Minnesota Saints. Despite another comeback effort, the PowerPlay fell short and lost 5-4.

The 2015 U.S. Championship was hosted by the Michigan Mustangs in Plymouth, Michigan on July 16-18. Four teams, Minnesota Saints, Michigan Mustangs, Philadelphia PowerPlay, and Texas Motor Mavs competed for the championship. After finishing the round robin with a 2-1 record, the PowerPlay fell to Michigan 5-2 in the semifinals. The PowerPlay defeated Texas 5-4 in the bronze medal game for third place and finished with an overall record of 3-2.

On July 8-11 of 2016, the PowerPlay hosted the Powerhockey Cup at the Pennsylvania Convention Center in Philadelphia, PA. The tournament was made up of six teams: Michigan Mustangs, Minnesota Saints, Ottawa Capitals, Toronto Lake Raiders, Toronto Rock, and the PowerPlay. The PowerPlay started off slow, finishing the round robin with a 2-3 record. Going into the elimination round as the #5 seed, the PowerPlay found their game. In the quarterfinals, goaltender Anthony Damico led the team to a shutout over the Ottawa Capitals 5-0. Against the Michigan Mustangs in the semifinals, forward Alex Pitts scored the game-winning goal with 29 seconds left in regulation to send the PowerPlay to the championship game. In a rematch of the 2014 Powerhockey Cup, the PowerPlay took on the Minnesota Saints. Similarly to 2014, the Saints jumped out to an early lead and after a scoring opportunity with seconds remaining, the PowerPlay lost 4-3. The Powerhockey Cup also featured two exhibition teams, the Philadelphia PowerPlay Grays, made up of players from the Philadelphia PowerPlay wheelchair hockey league, and the North American Selects, made up of players from all other teams participating in the 2016 Powerhockey Cup. These teams played two exhibition games. 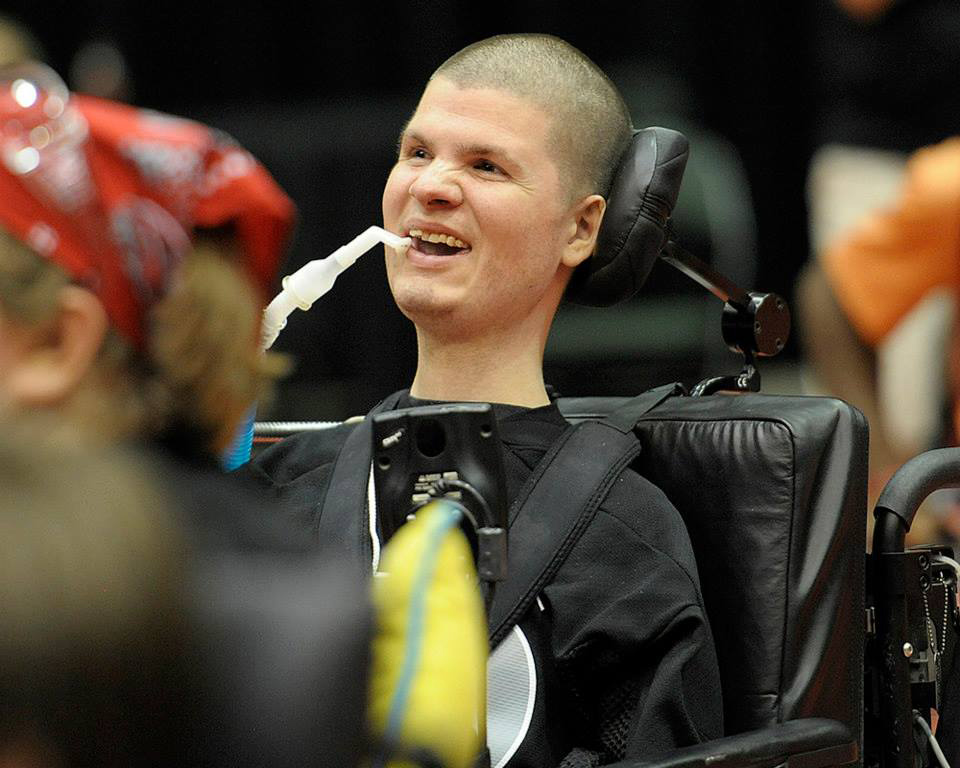 Patrick Hilferty passed away in May of 2017 from complications due to his Muscular Dystrophy. Over the years, the team had established an on-going relationship with the Philadelphia Flyers of the NHL. In September of 2017, the Flyers adopted the PowerPlay as the first powerhockey team to be affiliated with an NHL franchise. This was done to honor Pat’s memory and to encourage other NHL teams to reach out to their respective disabled communities to spread the message and grow the sport of powerhockey.

Less than a year after becoming an affiliate of the Philadelphia Flyers, the Flyers PowerPlay were set to play in the 2018 Powerhockey Cup in Plymouth, Michigan. The team was playing with a little more motivation, as it was the first tournament since the passing of founder Pat Hilferty and beloved teammate Pete Henkel. The Flyers PowerPlay, playing behind the hashtag #PlayForPatAndPete on social media, went on to finish the tournament with a perfect 6-0 record while averaging over 10 goals per game. The Flyers PowerPlay won their first Powerhockey Cup championship for Pat and Pete. 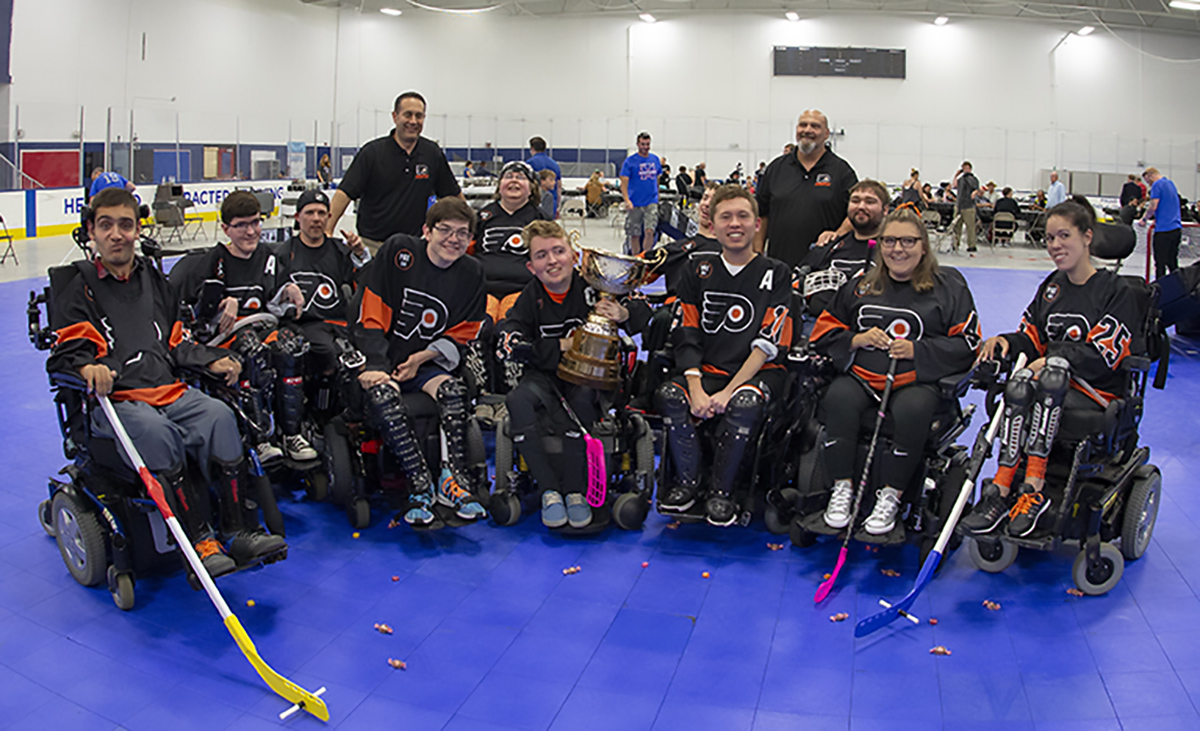 The Flyers PowerPlay with the 2018 Powerhockey Cup.

The following year, the Flyers PowerPlay were invited to play in the 2019 Canada Cup. The team traveled to Toronto and competed against the Calgary Selects, Michigan Mustangs, Toronto Lake Raiders, and Toronto Toros. The Flyers PowerPlay defeated the host team Toronto Toros 4-3 in the championship game to capture their second title in as many years.

Who are the Philadelphia Flyers PowerPlay?

Who can play for the Flyers PowerPlay?

The Flyers PowerPlay is open to all competent power wheelchair users both male and female. Our team is made up of about 25 players with various disabilities including Muscular Dystrophy, Cerebral Palsy, and Spinal Cord Injuries. The age range of participants varies.

How do I join the Flyers PowerPlay?

Those who are interested in joining the Flyers PowerPlay are required to register on our registration page. There is a mandatory $50 registration fee to join the team each year. Registration is open year-round. There is no limit to the number of players on the team. We are always looking for new players to join!

Can I come and watch a game before joining?

If you would like to come to a game before joining, we encourage you to do so. In fact, anyone who wants to come to a game is more than welcome! You can meet our players and families and see how we play and operate. We look forward to seeing you at our next game!

Do the Flyers PowerPlay have a schedule?

Yes. We currently play games twice a month on Saturdays September through June at Neumann University in Aston, PA and Norristown Recreation Center in Norristown, PA. The full schedule with directions to the venues can be found on our schedule page.

Can I donate to the Flyers PowerPlay?

Yes. You can make a donation via PayPal or mail your donation to our address, 1201 Blythe Ave, Drexel Hill, PA 19026.